24 Cannons at the Battle of Trenton: Talk & Demonstration 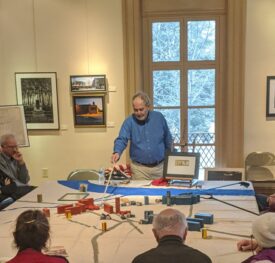 Alexander Hamilton, Col. Hand, and the 24 Cannons at the Battle of Trenton:  The program will follow the movements of all 24 of the cannons on the streets of Trenton during the Battle of Trenton in 1776. The talk will demonstrate why the 18 American cannons — including the two six-pounders commanded by Alexander Hamilton — were decisive in the victory over the Hessians, who had six three-pounders. The cannon actually worked under wet-weather conditions, while the muskets often did not.  Col Hand played an important role during the Battle.  The talk has been presented many times in Trenton during PATRIOTS WEEK, but never outside of Trenton.  A four-pounder cannonball will be on display during the talk.

Join Mr. Bosted in the Wine Barn for his discussion (45 minutes, approximately the length of the Battle itself), followed by time for questions. Stay to enjoy a glass of wine with fellow history enthusiasts. Free admission, please call to RSVP 609-924-2310.